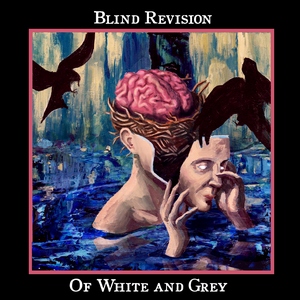 Blind Revision’s first EP, Fight or Flight, seemed to hint at a band that could go on to do bigger and better things. An energetic mix of progressive material that teeter-tottered on the metal/rock line and some hook-driven vocals, the promise was apparent. Two years later, we are looking at the band’s second EP, a conceptual piece focusing on a character facing a particular “demon” in each track (sensitivity, anxiety, addiction, love, death) as well as relegating it to a specific lobe of the brain. Head-y stuff indeed.

In comparison to the debut, Of White and Grey feels a bit more mature and developed. The concept helps to ground the band a bit, giving each track a particular purpose and sense of placement. A soft opening accompanies “Pressure,” which builds into some lush progressive riffing. Vocals don’t even enter until after the half-way point, and the continued elevation of heaviness (all the way to the end) surrounding Jen Janet’s vocals make the track a powerful opening statement. Probably the catchiest number of the bunch, “Mercenary” then shifts some of the focus towards some fantastic guitar melodies, bouncy/rocking riffs and a hooky chorus from Janet – a strong melodic solo later on solidifies the track as most addictive of the bunch.

The last three songs push in a heavier direction once more but still maintaining that same melodic balance and undercurrent. Intricate, proggy rhythms never become overwhelming due to the contrasting space they share with Janet’s soaring vocals (something that fellow proggers Chiasma have nailed as well). Some emotive moments pop up in each track, like in “Covanent,” with the “demon” of love allowing for the exuding of some heartbreak, and also in the repeated use of the line “I’m not free/He’s not free” atop sharp riffing in “Seeker.” By the time you reach “Ashes,” the ominous sound builds to a breaking point, but not without a silver lining in the clouds as the character faces the end. It’s an enjoyable payoff, especially the way the track moves to a climax around the 4-minute mark and de-escalates, only to toss a quick, final solo at the end.

Intelligently written both musically and lyrically, Of White and Grey is one of the strongest progressive albums you haven’t heard yet. It’s complex yet approachable and should be able to do a bit of cross-over with some proper word of mouth. Blind Revision should be going places.