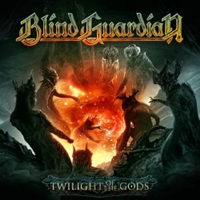 Remembering the early days of this German power metal institution when you had to buy their albums such as Tales from the Twilight World and Somewhere Far Beyond through import channels (as no North American label wanted to touch them in the ‘metal bad/alternative music good 1990’s years’), Blind Guardian finally made a breakthrough when touring here on a regular basis in the 2000’s. Granted, their headlining stature is more of the ProgPower/small theater variety in comparison to the hockey arenas/Wacken stages that push 70,000 attendees, but it is a major breakthrough to know that Tolkien oriented symphonic power metal has gained decent acceptance on these shores.

In preparation for their next full-length studio album Beyond the Red Mirror, we get the first single “Twilight of the Gods” along with 2 live cuts from their Wacken 2011 appearance. The new track has a lot of those quick hitting André Olbrich/Marcus Siepen guitar harmonies, layering things around the thunderous Frederik Ehmke drum set up and then Hansi commanding through his one-of-a-kind emotional vocal delivery. Reminding me a lot of the best times of Imaginations from the Other Side meets Nightfall in Middle Earth, this will easily slip in to future set lists to the exultation of hordes continent to continent.

As for the two live choices, “Time Stands Still – At The Iron Hill” and “The Bard’s Song”, you couldn’t ask for better complimentary tracks to showcase all facets of the Blind Guardian appeal. The former offering up large call and response audience participation and one of my favorites from Nightfall in Middle Earth, while the latter a staple for drunken acoustic reverie and loud mead hall sing-a-longs and unison clapping measures. Even if you are a staunch follower of heavier genres, you can’t deny the band’s impact on the scene and ability to translate their sound across decades and borders, no matter what’s in fashion or trendy.

Good things come to those who wait (as we know you get new records every 4-5 years), so expect Blind Guardian to again make us power metallers proud and this is a good teaser to start.