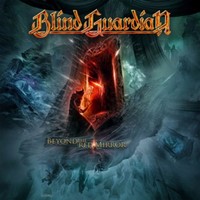 It’s been four and a half years since we last had a proper release from Blind Guardian, with their fantastic ninth album, At The Edge of Time, showing that not only did these vets still have the magic, they had it in spades. Truly a special album, and an important album for band & fans alike, raising the bar even higher on their standard of epic excellence, it left big shoes to fill. So naturally, Hansi and crew decided to take it up a notch, collaborating with classical choirs from Prague, Budapest and Boston as well as two ninety-piece orchestras in the hopes of creating an unforgettable work of magical symphonic power metal, reviving a twenty year-old storyline (from Imaginations from the Other Side) to deliver an epic story, only as they can, on their long-awaited tenth studio album.

So, how does it fare? In short, Beyond The Red Mirror is a very good album. But I wanted to like it more than I do, and that said, as well as falling short of their previous release with regards to the all-important hook, there is a feeling of disappointment while being awed at the same time. Really an album filled with highs and lows such as bitter combinations of an unappealing intro giving way to some positively electrifying guitar work and a generally great song on “Prophecies”, and conversely a really gripping intro giving way to the hyper-produced lead-off song on “The Ninth Wave”. Album single “Twilight of the Gods” and “Ashes of Eternity” are a bit grating, with their major-scale leanings, while “The Holy Grail” and (darkest/heaviest number) “Sacred Mind” soar. Perhaps the best moments on the album come from the least metal track on the record in the Queen/Beatles-esque “Miracle Machine”. Blind Guardian then brings the entire parade to town for the ultra-grand “Grand Parade” to close things out. Really an appropriate grand finale, and a very good summary of the music preceding the song…there’s probably at least a hundred people represented in one way or another on this one. Should you hear this track before any others, feel free to use it as a barometer for the rest of the album.

Jam-packed with rich and vibrant musical texture thanks to this grand collaboration of musical companies, there is no short supply of melody…the entire work drips with it, but it seems many of these melodies need ample time to fully digest. That’s to say that Beyond The Red Mirror is definitely a grower – and after time (well spent) with the album, it’s clear that Blind Guardian still have magic in spades.