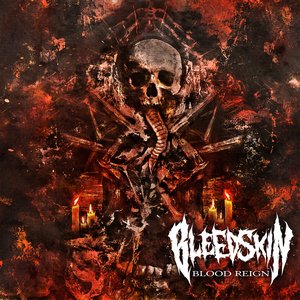 Intense and primal death metal, without having to go ‘old school.’ If that’s enough to grab your attention, BleedSkin is an act you need to acquaint yourself with. This Belgian act has only one previous EP, The Rotten One back in 2018, and they have set all their gauges to furious with this first full-length, Blood Reign.

The quickest comparisons would be that of Abnormality and Cannibal Corpse. There’s that same, unrelenting intensity that Abnormality captures so well that BleedSkin also digs their deathly claws into. Each of the eleven songs here features all out aggression. The type that never allows you to catch your breath, aside from the short little intro in “Perverted Feelings.” But as genre fans are aware, it takes more than unwavering force and bludgeoning power to keep people interested in this sort of thing – especially for a full-length effort. That’s where the same band comparisons kick in as well, with each of the songs tapping into some rather memorable riffs, particularly considering the all-out fury the band frequently attacks with. Playful sounding riffs and melodies are a big part within the jackhammering rage, with songs like “The Dead Sale” really mastering this aspect, with this track in particular using some infectious melodies before diving into a massive breakdown that will cause some damage to any nearby surroundings. Even in speedy moments, such as “Obsession,” the band keeps things spry on the melodic side, with riffs that like they want to crush you but manage to stay surprisingly unforgettable. It’s an impressive feat for such a young band, and they deserve some credit for keeping their sound completely soaked in death metal while delivering consistently high quality riffs. Anouk Debecq’s vocals are a key too, always brutal but alterations to the pitch from high to low and a high degree of understandability give an added bonus.

An exciting new act for those keen to getting their death metal dose of brutality at the highest level of intensity. Blood Reign is a true scorcher of an album, and one that should get the attention of genre fanatics with ease.