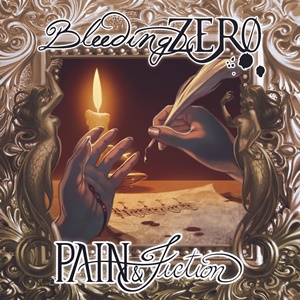 Bleeding Zero is an Italian trio of musicians who aim for a multi-genre approach to their sound for this debut full-length Pain and Fiction. Encompassing everything from gothic and symphonic metal to classical and operatic elements, you can expect a variety and versatility that ensures plenty of dynamic diversity over the course of these twelve tracks and almost hour-long playback time. The ability for the band to grab from various subgenres and execute often within the same track can be a blessing or a curse – depending on the atmosphere and flow of ideas you are taking in.

Operatic choirs appear against some progressive textures during “Sappho’s Leap” – a song that starts off very quiet with keyboards before the guitars kick into gear into a solid mid-tempo driving riff, the twists and turns recalling everything from Lacuna Coil to Sirenia. Orchestration that yields flute, harp, and deep classical accents fuels “Ecce Ancilla Musae” – the Italian-sung lyrics where vocalist/composer Rachele ‘Olympia’ Manfredi gains confidence in vibrant registers for her rock potency and operatic elegance. The more commercial angles for the guitar/keyboard hooks during “Bliss of the Sea” will find favor for most Nightwish followers – understated ambiance during the verses which builds into a tremendous choir-fueled chorus as well as an emotive, circular lead guitar break. The occasional folk-like elements that crop up time to time (opener “Terra Nova” a prime example) also give Bleeding Zero that instantaneous hook appeal – while the battle between orchestration and metal instrumentation often seesaws between the 50/50 mark, although the guitar work has that bluesy, sophisticated edge to make “The Seal and the Siren” another standout.

Recording in Italy while using Finnish mastering/production work from Tapani Rauha to round off the final sonic qualities, there’s a primal edge to the proceedings that makes things a bit rawer than one would normally expect from an act of this type. There is plenty to digest and process here – talent is present, you just wish they would key in a bit more on specific aspects instead of trying to throw four to six different elements at once to retain your interest. Bleeding Zero has a symphonic/gothic sound with more than adequate players and could grow comfortably into their own skin through more exploration and confidence by the next record.