Bleeding Through – Love Will Kill All (SharpTone Records) 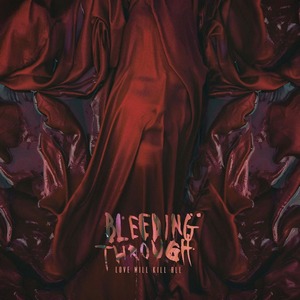 After a very storied history, a few years back California’s Bleeding Through announced to the world that they were calling it quits. One of the more innovative of the metalcore elite, they were always a tough band to pigeonhole, due to their use of death, black, and thrash elements inside the hardcore/metal framework. Things did seem to shift in more melodic or heavy directions depending on the album, but the sense of genuine emotion was one that always stuck with the band. But thankfully, retirement didn’t stick.

Now with a renewed sense of vigor and perspective, Love Will Kill All is the band’s first new release since 2012’s The Great Fire. Upon first listen, it’s clear that the band hasn’t lost a step. In fact, Love Will Kill All seems to resemble all the facets of Bleeding Through that made them such a force to be reckoned with. The intensity and anger that followed the band since the beginning are still just as scorching and addictive – they are one of the few bands that can truly grab the listener by the throat, and tracks like “Slave” and “Buried” capture that full-speed ahead mentality. Fueled by frantic riffing and sneaky Gothenburg-inspired melodies that are enhanced by blackened synths and thunderous drumming, there’s plenty to pick apart and enjoy. Of course, vocalist Brandon Schieppati’s immediately recognizable barks add to the intimidation factor, as does the immediacy of the lyrical content (which may not be poetic, but it’s genuinely raw). Schieppati’s vocals are commanding, and when placed with galloping, thrashy riffs or some deserved breakdowns (see “Cold World”), it’s a combination that’s hard to beat.

But the band has evolved a more melodic sense over the years as well. The contrast between their vitriolic hardcore and nuanced metal has grown more striking as they have continued to push the boundaries. The eerie keyboards continue to bring about a certain level of trademark atmosphere, especially when given the chance to shine like in “Dead Eyes.” “Remains” takes a more direct, metalcore-esque approach with a glimmering chorus to offset the more snarling verses, yet presented in a way that’s in line with Bleeding Through. The same can be said for the surprisingly poignant closer “Life,” with some moments that are almost saccharine in nature, but the band owns the feelings and it makes for a rather touching back and forth with the song’s more visceral side. Even more traditional Bleeding Through tracks, such as the wisely chosen single “Set Me Free,” see that dynamic of darkened atmosphere and snarling aggression just as sharp and pointed as anything the band has accomplished.

Love Will Kill All carries with it the essence of what Bleeding Through has always stood for, while bringing things up to a 2018 standard. Easily on point with some of their strongest works (such as the glorious Declaration), Bleeding Through have returned with some of their greatest songwriting to date. Sure to excite long-time fans and ensnare plenty of new ones, this is the type of comeback that many bands dream of.