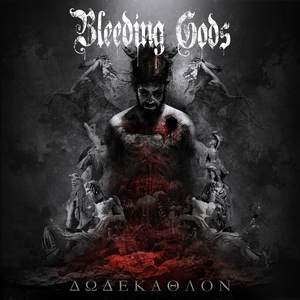 With all of the attention paid to Vikings and Norse mythology, it only makes sense that some bands would gravitate towards the Greek mythological legends as well. At least it’s a change of pace from the usual. Bleeding Gods, on their second full-length (and first for Nuclear Blast), tackle Hercules’ famed 12 Labors in blackened death metal fashion.

With each track covering one of the labors, it’s certainly some fresh subject matter that the listener can dive into (and further research if one feels the urge). The band’s combination of blistering, blackened, and sometimes thrashy death metal alongside some keyboard enhancements works well enough – energy seems to rain down in buckets as they leap into the faster segments (see “Beloved by Artemis”). The synths play their role to give the surrounding instrumentation a suitably epic/cinematic feel to it (“Tripled Anger”). Vocally, things fall to the wayside of the standard barks, but thankfully with the depth of the material they provide enough enunciation to get the story across without resorting to the lyric booklet for fulfillment. There really only lies one major fault with Dodekathlon – it’s solid death metal, but even with the sometimes grandiose atmosphere behind it, at nearly an hour in length, there’s just not enough there to keep the listener fully engaged. The story and concept are quite well executed, as is the music itself, but one can’t help but feel this would be a stronger release if it were trimmed down about 15 minutes.

Dodekathlon is nothing if not ambitious. While that determination leads to a bit of a bloated release in the long-run, it’s hard to truly knock Bleeding Gods’ enthusiasm for the source material and crafting an extreme metal release that tells an engrossing story. If nothing else, it puts the band out there as a hungry and developing force to keep your eyes on in the future.