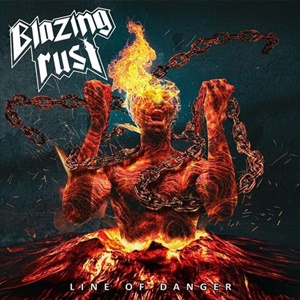 The next line of traditional heavy metallers hail from all parts of the globe. Although it seems Europe and North America are leading the parade of acts garnering attention, there are also groups coming from other lands – including Russia which is home to Blazing Rust. Aiming to revive the golden era of the 80’s, Line of Danger is the quintet’s second album and assuredly contains all the hallmarks of classic metal – focusing on solid musicianship, pirate-sized hooks, and catchy songwriting that should garner followers young and old.

The strong rhythms from guitarists Roman Dovzhenko and Serg Ivanov reside in that late 70’s to mid-80’s pocket when Diamond Head, Tank, Saxon, and Iron Maiden won the hearts of the scene. They can go from spirited power parts to twin harmony bliss all within the same arrangement as “Amidst the Furious Waves” illustrates, and then rear back to higher energy thunder for the gallop-oriented follow-up “Race with Reality”. You get playful rhythm section work which swings in that walking, bluesy manner that put Thin Lizzy and Black Sabbath on the map during “Murder”, the low chugging from bassist Dmitry Pronin propulsive and almost acting as a third lead instrument while the simplified, one word chorus has that ideal gang-like charm. The ace in the hole is the bright delivery of singer Igor Arbuzov. He has the spirit of British singers when it comes to phrasing and inflection – as well as the range of the early Joey Tempest/ Europe years (think Wings of Tomorrow) when listening to his work for “Let it Slide” and the shape shifting “Only to Burn”. Keeping the record tight at eight songs and under forty minutes ensures multiple, frequent playbacks – plus the versatility in tempos and musicianship-oriented sequences allows the listener to key in on specific parts and discover something unique for each successive listen.

Blazing Rust are going to make a name for themselves through Line of Danger – the riffs, the melodies, and the songwriting are first rate, and you can sense the synchronized headbanging mandatory with this one.