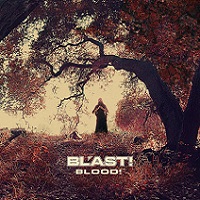 Dave Grohl got his hands on this, which for some, is enough to stop reading/listening right away. (Doesn’t Zakk Wylde hate this dude?) The rather visible Foo Fighters mainman has given Blood!, a collection of songs from early 80’s hardcore/crossover act Bl’ast a fresh mastering job and subsequently, a new lease on life. Buyer beware: Just because something was unearthed from the 80’s, and has some “name” people behind, doesn’t always mean it’s worth your time. Consider Blood! a toss-up, then.

Helping the publicity push is the fact that Alice in Chains lead singer William DuVall was in the Bl’ast ranks around the time of this recording. DuVull (who is an excellent singer, but does not sing here) goes largely unnoticed in the crossover metal firing line, as manic, quirky, and partially complicated songs like “Ssshhh,” “Winding Down,” and perhaps the most metal number here, “Something Beyond” translate to a very sign-of-the-times cross of Animosity-era Corrosion of Conformity and the crossover band everyone points to anyway, DRI.

There’s ample amounts of energy and visibly agitated hardcore shouting across the board on Blood!, thus certifying Bl’ast as one of those bands who probably had no trouble getting along with the metal dudes and the punks. Still, one can’t help but think this is another one of Grohl’s pet projects (ala Probot), sure to get some riled up, while others will just shrug and move along…