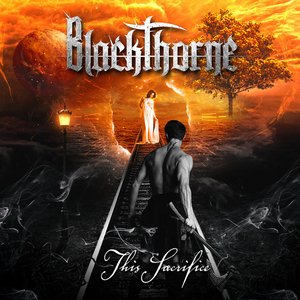 With symphonic acts, oftentimes the best approach is to make sure you are offering something that is outside of the usual box. Ohio newcomers Blackthorne have quickly grasped this fact for their first full-length album This Sacrifice, which takes the symphonic standards of soaring keys and female vocals and gives them a fresh coat of modern groove and melodic death metal aggression to help them stand apart from the crowd.

Seemingly coming across as a hybrid in the styles similar to Epica and Deadlock, Blackthorne’s approach to symphonic metal is certainly an enjoyable one. The keys do a good job of maintaining their presence but not going too far – they get their moments to shine (“Forgotten” or “This Sacrifice”) but often play along with the guitars as an enhancement, rather than stealing the show. This gives Blackthorne as heavier approach, with more modern metal grooves and Thomas Ullom’s growls cranking up the intensity and offering a greater range to play off of the keys and Lindsay Ketchum’s often soaring clean vocals. The only break from this dynamic comes in the short “Dawn,” which focuses solely on Ketchum (and synths behind her), which shows some of her strongest work on the album. Despite the fact that the keys have a darker tone to them, the music still comes off on the more upbeat end, with “Seas of Torment” and “Captivate” in particular being more memorable in regards to their blend of strong choruses and heavy riffs, and is held together by some strong musicianship overall (check out the melodic solo that ends the album on “This Sacrifice”).

Truly, Blackthorne’s greatest strength lies in taking all of these familiar elements and somehow making them feel fresh. The heavier riffs and darker tone work wonders in pulling in the listener, as does the vocal interplay between Ullom and Ketchum. If you are in the mood for symphonic metal that sits comfortably at the heavier end of the genre, This Sacrifice is worth a thorough investigation and proves Blackthorne a band to watch looking forward.