Blacksmith – Strike While the Iron’s Hot (Heaven and Hell Records) 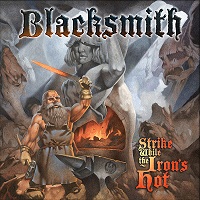 Continuing the Lost Relics series of metal bands who maybe didn’t get their just credit the first time around, upstate New York traditional metal band Blacksmith have unleashed Strike While the Iron’s Hot, a 13-song CD and three show DVD packed with the entire history of this group. Beginning in 1984 in Albany, NY with guitarist David Smith and vocalist Heidi Black, they would soon be joined by bassist Michael Marino and drummer Tommy Roy. Influences come through on their five-song 1986 EP that starts the CD portion like Motorhead, The Rods and Judas Priest on “Rock Hard” and “Louder Than Hell.”

After this lineup went their separate ways, David Smith recruited three new members (including male vocalist Malcolm Lovegrove) to sign a deal with Tropical Records in 1988 and release their debut album Fire From Within in 1989. This would be my main experience with the band. Lovegrove’s voice is much stronger in the higher ranges- befitting the change in music which moved into more of a power/thrash direction. Smith’s solo technique on songs like “House” and “A Taste Of Darkness” melded the melodic NWOBHM features with the then burgeoning Yngwie shred mechanics.

The DVD is truly where you get to see all aspects of the band. Two shows with the Black lineup highlight many of their influences, as you’ll hear some covers of W.A.S.P., Motorhead, Loudness, and Diamond Head amidst their own originals from a 1986 set in their home stomping grounds of Albany, NY. The footage from the Burlington, VT show in 1987 may be a little closer in terms of the camera set up, but both highlight the dynamic presence Heidi had back in those days. She certainly fit the Betsy Bitch/Leather Leone mold more than any of the normal gothic ladies in the business these days. The third show from the Marino lineup gives you the heavier side of Blacksmith, and I really think they were primed for bigger and better things if not for the changing ‘grunge’ tides in North America for the early 1990’s.

Ardent metal collectors will pick up on this, as I’m sure the European and Far Eastern countries live for Blacksmith. If you miss the days of true traditional metal where the hooks, melodies and songwriting just goes for the jugular without any long winded excess, Strike While The Iron’s Hot would be a good addition to satiate those desires.