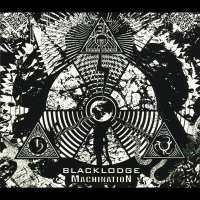 Black metal’s inability to work with industrial elements is one of metal’s worst-kept secrets. Well, it’s actually not that much of a secret given the bands

that gave it the ‘ole college try (Tidfall, Zyklon, The Kovenant) are either on hiatus or broken up. So maybe it has something to do with the style…it’s like the Bermuda Triangle of the black arts. The sound where bands go to die. Something to that effect. It almost makes one wish a similar fate would befall bands of death and metal-core variety, but that’s a story for another day…

Blacklodge is a France-based trio led by Saint Vincent, who is not to be confused with Morbid Angel’s David Vincent, or former Major League Baseball Commissioner, Fay Vincent. Or even one-time Kiss guitarist Vinne Vincent, although he wore face paint, which surprisingly, the lads Blacklodge don’t wear. Nevertheless, Machination (the band’s third overall) is probably the most literal interpretation of the industrial black metal sound as you’re going to find, for the band relies solely on a drum machine, whose constant pitter-patter either creates a discotheque-like atmosphere, or is the soundtrack to an 8-bit videogame

The pulsating, extreme rush of “Neo.Black.Magic

.” takes a romp similar to Satyricon’s Rebel Extravaganza, except for the fact Satyricon is infinitely more human sounding. Nevertheless, the constant crashing of digitized sounds and prime black metal riffs do actually serve a purpose – they help create an inhuman, machine-like thrust that never ends. It’s like visiting a factory (an industrial one, of course) and having to suffer through what its workers do every day, which is the constant churn of machines.

Black metal purists will instantly balk at such a concoction, while the BM art crowd and industrial metal scene might have a tough time grappling with Blacklodge’s overt and highly-extreme method of pandering. But hey, if all drummers in the world suddenly lost the ability to play a blast-beat, we know who will be standing tall atop the black metal scene.