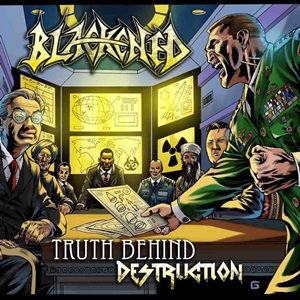 Always one of this scribe’s favorite Metallica tracks on …And Justice For All, it’s not really surprising to see Blackened used as a thrash band name through the years (almost nearing double digits according to Metal-Archives). Brazil’s Blackened came into existence recently, since 2013 issuing a demo and EP prior to signing with Germany’s Witches Brew for their first full-length Truth Behind Destruction. After a few spins, it becomes clear that this quartet embrace a lot of diverse Bay Area and European influences across the board through these ten tracks, very riff-centric while shifting gears as they develop dynamics and maintaining listener engagement.

As guitarists Ulisses Nathan and Carlos Knauber prefer a crunchy, very tight downpicking method that has a lot of Metallica/ Znöwhite tendencies – serving up addictive, headbanging ear perk-ups on “Chemical Terror” and “Stay Wasted”. Stop/ start changes also signal a lot of old-school ethics and philosophies – as the band know how to create anticipation for the subsequent measures even when dishing out speedier fare for “Brain Control” and the vicious title cut. Gang vocals burst at the seams for certain quick hitting choruses, while the rhythm section can accent other transitions with a little melodic nuance that improves retention. Check out the instrumental section for the aforementioned “Brain Control” or the 6:06 closer “Against the Grain” for bassist João Wegher and drummer Marcelo Martins as they see-saw between energetic speed and pocket groove needs.

Certain clichés abound – the warning signal and gunfire effects for “The Front Remains”, the acoustic instrumental “Suffer Under…” that gives the record a brief mid-way interlude – but the deal breaker from some into pushing Blackened from local heroes into international respect lies in the speedy word spew from João. He doesn’t growl as much as bark out the lyrics in sort of a Mike Muir meets crossover pattern, which can work for the faster songs but be a tad monotonous during a simplified chorus for say “Chemical Terror”. In the end, he serves Blackened’s thrash purpose adequately, because the riffing, hooks and solid tempo versatility outweighs any limitations vocally. Allan Goldman’s art work has an Ed Repka feel for sure to top off the package. Truth Behind Destruction can appeal to people who enjoy a little more punk/heavy metal edge to their thrash cocktail – illustrating versatility and impact to a thriving Brazilian scene.