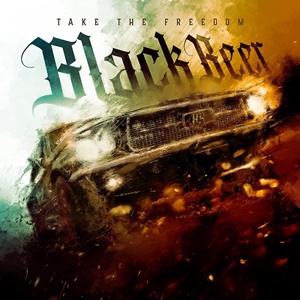 An international mix of musicians congregating together in France, BlackBeer pay tribute to an era of melodic hard rock/metal that most who grew up in the 80’s remember vividly. Coming together last year, they quickly set about working on material for their debut album Take the Freedom, signing a worldwide, multi-album deal through Pure Steel Records. Brothers Emmy and Emil Reyes on guitar and bass respectively (former members of symphonic metal act Gamalyel) moved from Venezuela to France for political reasons – while singer Ivan Sencion original comes from Argentina – as French musicians Sylvain Vidal on drums and Bertrand Cape on second guitar round out the five-piece lineup.

Lovers of groovy riffs, bluesy vocals that can reach sinister highs, plus swinging tempos that can be energetic and powerful one track, then laid back and in the pocket the next will find most of BlackBeer’s songwriting and performances delightful. Ivan’s soaring pipes and smart sensibilities to inject personality and grit when called for make “The King of Water” and “Sweet Life” early standouts on initial passes – think a mix of David Coverdale, Sammy Hagar, and others in that 70’s brigade. Cars burning rubber against the churning rhythms give “The Night Is Ready” that rowdy, gang’s all here sentiment, the chorus plus wah-wah infused lead break ready made for swilling down your favorite chilled alcoholic beverage. The walking bass aspects shimmer next to some commercial-driven hooks for the title track – a song that aligns with early Europe meets Kissin’ Dynamite ethics. Acoustic guitars and keyboards add texture to specific cuts, and of course you can expect a couple of slower ballads that turn on the sensitive, emotional charm these gentlemen possess – “Turn Off the Pain” the better song because of the twin guitar line measures against another explosive, dramatic vocal performance. It’s as if these musicians prefer delivering the meaner side of melodic hard rock with occasional metal flourishes, paying attention to some modern music in the process against the Whitesnake, Guns ‘N’ Roses, Skid Row-oriented influences.

BlackBeer are another newer talent that plug in, crank things up to ten, and keep the hooks coming hard and heavy from first note to last, appeasing those who love those arena-rock heydays.