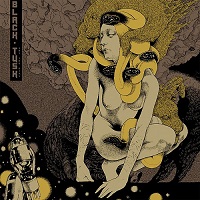 The sludge metal genre is certainly one that is gaining more attention these days, with bands like Baroness, Mastodon, Kylesa, and the like all bringing the sound to the masses in a very respectable way. Of course, there are some not so favorable ones who are fantastic at boring people to death. Black Tusk, however, is one of the good ones, and with their third album, Set the Dial, they bring a groove-laden slab of grimy and pounding metal the only way they know how. It isn’t reasonable to ask for more, right?

With these guys, you’re not going to get anything really out of the ordinary. No strange time signatures coming out of nowhere and other progressive shenanigans – which can be fantastic – but it’s equally as good to have something reliable, well-written, and executed to a tee. In other words, you know what to expect, but it’s done well and the familiarity is a welcome sound. That’s Black Tusk in a nutshell, and they’ve proven to be one of the better examples of it.

With Set the Dial we get another collection of just plain solid sludge. The guitar tone is thick, complimented by drums that are muddy (in a good way) and intense, all with throaty, snarling vocals thrown on top. No example better than “Bring Me the Darkness,” the second track on the disc. There’s an infectious groove, with some finely done guitar work from lone axeman Andrew Fidler, all overflowing with brute force. “Ender of All” is another fine example, especially with some well-placed stop/start riffage and especially tasty drum rhythm. Other tracks, such as “Set the Dial to Your Doom” move at a little bit of a slower pace than the previously mentioned tracks, and they work out very nicely and give the album a bit of variance – never a bad thing.

Production-wise, this is absolutely perfect. It has a dirty feel to it, yet you can make out every detail. Exactly what a record and a band like this absolutely require for their music to work. Too clean, and it sounds overtly polished and sparkly. Too grimy, and it sounds like a hodgepodge of trash. Black Tusk finds their perfect medium here with Set the Dial.

Admittedly, as much as yours truly enjoys this type of metal, there haven’t been a lot of bands perpetuating this style that have been impressing as of late. Black Tusk, however, certainly do. One of the better examples of this style this year, Black Tusk have definitively made their best album. Pick up Set the Dial without hesitation, and check out one of their live shows, of which they’ve garnered quite the sterling reputation for.