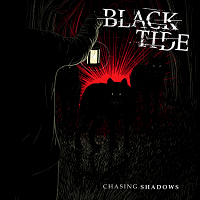 Circa 2008, Black Tide were a much-ballyhooed act. As a bunch of pre-teens, the band had already scored a major label record deal, a spot on the inaugural Rockstar Energy Drink Mayhem festival, and some quality opening slots. Of course, the novelty idea of a bunch of young ‘ns playing metal caught plenty of people’s attention, and rightfully so – it’s cool to see the kids going at it on their own. But, predictably, Black Tide were unable to capitalize on the momentum generated from their Light from Above debut, and more importantly, they grew up. As in, they got older. Now on their third album, Chasing Shadows, the Florida-based trio look to recapture the positivity they had seven years ago.

Only two gents are left from the band’s “glory” days of yore: Singer/guitarist Gabriel Garcia, and co-guitarist Austin Diaz. Garcia, in particular, has had to do the most growing up, having evolved from a nasally vocalist to something more full and in line with a borderline metal act like Bullet for My Valentine. In fact, the Welsh outfit are the most common reference for Black Tide throughout Chasing Shadows. The band is privy to some nifty guitar interplay (“Welcome to Misery” in particular), while the choruses are light, and radio-friendly. Some questionable songs are in tow, most notably the oaf-ish “Sex is Angry” and the weak balladry of “Heaven.”

Just the whole thing is a tough go for Black Tide, whose musicality is top-notch and pro, but are missing the FM gravy train by the skin of their teeth. While it’s nice to see the band develop and on another level, still be active, it’s going to be an uphill climb considering most folks associate these lads with the time when they weren’t old enough to drive.