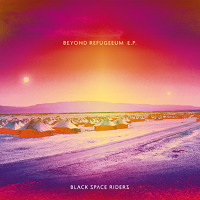 You hear the word “leftovers,” and the collective moan and groan from the record buying and/or music stealing public echoes. Usually referred to as b-sides, songs that didn’t make the album have a negative stigma attached to them, probably because they’re considered not good enough for the track listing at hand. Save for Katatonia, who are without question, the band who makes the best use of extra songs, few metal and/or rock bands know what to do with their leftovers. Lo and behold, exciting German psych rockers Black Space Riders do, as evidenced by their Beyond Refugeeum EP.

Featuring four originals the band knew wouldn’t be right for their previous Refugeeum album along with two remixes, the EP is a savory gulp into the world of forward-thinking progressive music. This is properly exemplified on “Freedom At First Sight,” a hard-banging, rollicking rocker offset by JE’s totally morose vocals. It’s beauty in contrasts. The band’s fully capable experimental stadium pop rock side gets a go on “Droneland” and “Starglue Sniffer,” which features some snappy vocal turns by JE again.

Able to successfully traverse the bounds of prog, rock, and metal, Black Space Rides are a true oddity in the best sense possible, able to function (and prosper) without falling prey to the ever-tricky notion that in our to be truly prog, you have to be totally weird. As such, Beyond Refugeeum reinforces that notion; a rare collection of extra songs that get the job done, all the while showcasing a band who are one of psych/prog’s best kept secrets.