Black September – Into the Darkness, Into the Void (Prosthetic Records) 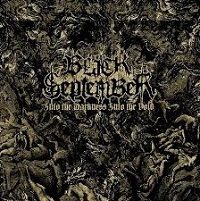 Cue old man gripe: The problem with black metal nowadays is that it’s next to impossible to define. Certain bands that think they’re black metal, but they’re not, and a segment of bands claim they’re not black metal, but they are. There should be some type of governing board to determine these parameters; a veritable “who’s-who” of BM. Nominees for a three-person panel would be the corpse of Euronymous (for that vintage flavor), Fenriz from Darkthrone (to determine who is most “troo”), and Blake Judd from Nachtymystium (to ensure the hipsters are cared for). We could then hand over the task of making such distinctions, for a band like Black September (we’re guessing “Black January” was a bit too grim) just muck things up even more.

Into the Darkness, Into the Void is the Chicago-based quartet’s second full-length, the follow-up to last year’s rather pedestrian The Forbidden Gates Beyond. Into the Darkness is a step up from its predecessor, with the token death metal churn now blossoming (or mutating) into a full-frontal black metal motor assault. Mounds of d-beats and frazzled riffs and chords comprise the bulk of the album’s nine song bounty, as nifty double-bass patterns on “Into the Darkness” give way to searing black-thrash on “Solitude” and album highlight “Beyond the Realms.” There’s no let up or remorse across the album’s running order, meaning that it’s probably wise to batten down the hatches and let this storm blow through.

With all this, the conundrum over where to place a band like Black September remains. They’re not punk enough to satiate the filth-bucket of d-beat, and they’re not gruesome enough to run with retro death metal crowd, but there are just enough shards of black metal to make the average punter ponder what shade of corpse paint these dudes don at their shows. They don’t wear any (thank you, promotional pics), but no one will fault you for being confused.