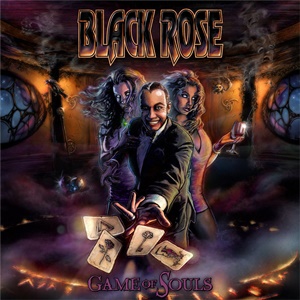 A part of the Swedish hard rock/metal movement since 1990, Black Rose arrives at their seventh album for Game of Souls. Delivering a sound that contains a host of European/American influences that cross the spectrum of classic 80’s metal, neoclassical/shred chops, and straightforward melodic hard rock, many will be able to pinpoint what these gentlemen want to get across for the songwriting to use as a launching pad for tight movements, focused arrangements, and stellar performances.

The fluid arpeggio abilities and fleet finger positioning from guitarist Thomas Berg easily stands out on initial passes through his riffing and jaw dropping lead breaks for “Omen” and the title track – Yngwie Malmsteen and his cohorts easily on this man’s radar. The supporting rhythm section mechanics of bassist Anders Haga and drummer Peter Haga align well in that solid groove support that can be understated, although gaining specific spotlight action in key moments of the Dokken/White Lion-ish “Queen of the Night”. The icing on top of this delightful set of tracks would be the robust, full delivery from singer Jakob ‘Jacke’ Sandberg. He has strength and conviction in all registers, hitting some sinister eagle-like highs a la Graham Bonnet or Geoff Tate for the Iron Maiden-esque “Victory”, yet smooth as silk on the street level hard rocker “Love Is the Start”. Consistency and quality control appear to be hallmarks of Black Rose – even if this is a style that may not necessarily set cash registers on fire as it would have say 30 years back.

These ten tracks easily cement themselves into the brain and body, igniting a fervor best satisfied at peak volumes or through the right amplification and PA system at your favorite venue/festival. Due to signing with smaller labels or using the independent route to release material, Black Rose probably hasn’t garnered the proper recognition they deserve. Seek out Game of Souls though if you love a great mix of melodic metal/hard rock with serious neoclassical chops.