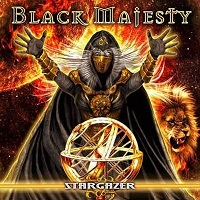 to koala bears, kangaroos, and vegemite sandwiches (thank you Men At Work for that reference), Australia also maintains a very healthy metal scene, especially in the power/progressive and extreme sub-genres. Black Majesty from Melbourne revels in melodic power metal with progressive tinges, establishing over the course of their four studio records a sound appealing to an older generation who love double-bass fury, kinetic dueling guitar work and multi-octave vocal prowess. The fifth platter Stargazer delivers more of the same, with no apologizing in their commitment to their cause.

love to flash around happy Helloween cultural reference points – the speedier “Voice of Change” giving vocalist John Cavaliere ample chance to reside in his higher falsetto Dickinson-meets-Kiske zone. The band also know when to fluctuate their tempos- becoming more morose and theatrical on the militant “Symphony of Death” which begins ballad-ish before the Maiden and Iced Earth stomp prepares you for the impending battle cry.

Recording at their own studio in Melbourne as well as with Masterplan’s Roland Grapow at his studio in Slovakia, the sound

has a clarity that emphasizes strong melodies, hero worthy soloing, and a rhythm section up to the energy exchange challenge. The title cut even throws down a tip of the influence cap to Blind Guardian, who the band toured with on their Australian tour last year.

Black Majesty has their own niche brand and performs their songs with a majestic grace that bleeds professionalism. Transforming Iron Maiden and Helloween at their creative peaks for a modern

, 2012 audience, Stargazershould have no trouble settling in to those audiences’ record collections.