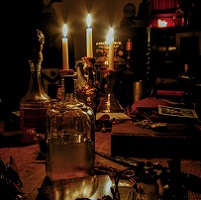 Borne from long walks in the British countryside (awesome), trips to the pub for ale (nay on ale, but the convos are probably good), and love for 70’s prog (a bit overdone), England’s Black Magician are the latest in a swelling line of bands looking to recreate times of yore. They don’t have to look very hard for bands doing the same thing, though, but at least they appear to be remotely cognizant of not taking the same rip-off bait most of their contemporaries do. On their three-song The Pursuivant EP, an eclectic, mildly Cathedral-like outing is had…with plenty of Hammond organ to boot.

The Hammond is the show-stealer here, much like it always has been (see: Jon Lord). Placed firmly at the front of the mix, Jonathan Fletcher’s organ work conveys the sort of eerie, horror-themed mood that is actually less prog, and more Goth. It’s all over the opening title track, serving as a base while the vocals of Liam Yates recalls another Brit, Cathedral’s Lee Dorrian. The acoustic plunge of “Greene Knyght” is pretty homely in a Genesis kind of way, while the astral clank of rattle of “Black Henbane” hits like one of those stretched-out early 70’s Deep Purple live jams.

With so much to choose from in terms of wannabee 70’s rock acts in the metal scene (how this has come to be is anyone’s guess), a band like Black Magician would be wise to stick to their left-of-center guns. We don’t need another bunch of jean jacket-wearing dudes parading around while jacking Sabbath, that’s for sure.