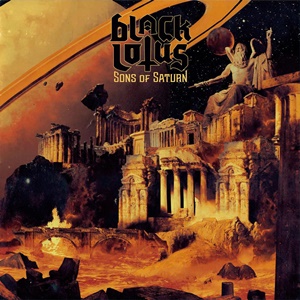 Originating to get back to a traditional heavy metal base in terms of their doom/stoner platform, Spain’s Black Lotus started in 2016, picking up the current lineup over the next year while assembling material for the release of this debut full-length Sons of Saturn. Consisting of five main songs and three shorter atmospheric intros/interludes spread out over the record, it’s clear that this four-piece possess proper reverence and respect for all eras of the doom/stoner and post-metal movement, encompassing decades of influences to deliver sonic gut punches of the slow, dreary variety.

The almighty riff reigns supreme when airing cuts like “Protective Fire” and the title track – the type of ominous action that put Black Sabbath on the map, but also spawned impressive expansion through the work of Candlemass, Solitude Aeturnus, and early Paradise Lost. It’s impossible not to get swept up by the low groove/swing action that along with twin vocal harmonies (drummer Hug Ballesta and bassist Crisitan VII handling those duties) make every song easily understandable and subsequently dive deep into your brain through the harmony accents and atmospheric touches as well as band interplay during the instrumental sections. Two of the songs “Sandstorm” and “The Swamp” go beyond the ten-minute mark – the former taking on some Middle Eastern flavoring to go with the lyrics, while the latter incorporates evil bass lines and measured quiet parts that allow the arrangement to breathe and build tension in a post-metal ambiance, the lead break quite effective through the distortion pedal entourage. Traditional metal factors in on the mid-range vocals and the occasional time signature/tempo transitions, where you can sense an appreciation for older Iron Maiden and all phases of Grand Magus.

Sons of Saturn will gain favor with most doom metal mavens – especially those who like more of a throwback to the traditional elements that made this genre very cult-like in its appeal. Black Lotus could be a name to watch in the coming years based on this early impressive outing.