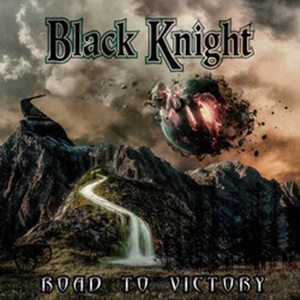 Cranking twin guitar harmonies against steady rhythms, solid in the pocket tempos, and soaring vocals – the essence of traditional heavy metal will never die as long as bands like Black Knight continue writing and delivering records. Hailing from the Netherlands, their roots began in 1981 – although only releasing two demos in two albums over the course of the last twenty-six years. Road to Victory is the third full-length, and first since 2007’s The Beast Inside – with three new members secured in the interim. Given my first exposure to the group, the eight songs present a classic metal platform using current production values to elevate the strength and power of this material to another level they probably haven’t received on previous outings.

Right away the guitar riffing and hook-infused nature Ruben Raadscheiders and Gertjan Vjs merges the grace of players like Glenn Tipton, KK Downing, Jake E. Lee, or even acts like Armored Saint and Vicious Rumors as you take in songs like “Pendragon” and the opening title track (the second riff a tip of the cap to “Electric Eye” from Judas Priest). Midway through the record a couple of longer six to seven-minute cuts such as “My Beautiful Daughters” and “Crossing the Rubicon” give the quintet a chance to flex a bit of their instrumental skills against some impressive power riffs and soaring melodies courtesy of singer David Marcelis – the former especially interesting through it’s serene, bass-fueled twist by Ron Heikens plus some circular guitar runs that evoke Dokken meets Queensrÿche textures. Mastering duties by Jacob Hansen allow the dynamics to shine – the energy level peaking even near the conclusion where a Painkiller-like double kick anthem such as “Primal Power” should elevate fists and shouts from the audiences when Black Knight can return to the stage.

Although drummer Rudo Plooy remains the lone original member left in Black Knight, he’s surrounded himself with professional players and kept the spirit of heavy metal alive and breathing through Road to Victory. When you have solid skills and a great understanding of composing killer riffs, hooks, and melodies, the results should be outstanding – as they are here.