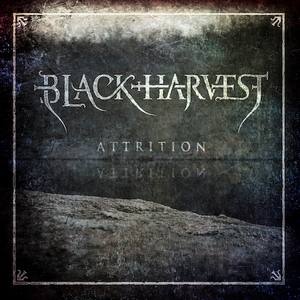 Though we at DR only discovered Black Harvest with their last release, 2014’s Abject, they (well, mostly mainman Kishor Haulenbeek as he does most of the instrumentation) have been around for well over a decade and have 5 full-length efforts to date. Attrition is the latest release, a 30-minute EP that masterfully weaves together many facets of extreme metal into a surprisingly digestible and engrossing listen.

If your favorite metallic flavors are death and black, you are in for a treat on Attrition. Progressive, technical, and skronky/dissonant death metal merges with blackenened influences alongside other components, such as acoustic guitar and some choral voices to generate something familiar yet able to find its own place. As such you can picture fans from Gorguts to Opeth to Krallice finding something they may like as they move through the album. But it’s more than simply a piece-meal effort. In fact, Attrition’s strongest feature is how cohesive it is. While each track is distinctive, one can also sit back and just listen to the EP as a whole and generate a new perspective. The riffing can be particularly intense at times, digging into some technical spiraling (see “Solace”) but the melodic sensibility within the structuring keeps you thoroughly invested at any given moment. Some blackened or melodeath melodies really strengthen the backbone of the tracks, providing some real standout moments, like in “Capture,” where some of emotive screams mix with fast-paced melodies before the song breaks into some choral singing at the end. The drumming was done by Imperial Triumphant’s Kenny Grohowski, and if you are familiar with his work in said band, you will be equally impressed by his work here.

Much to love about Attrition, and it’s sure to impress a wide crowd if given the chance. The melodic, frantic, emotive, and eerie vibes that meld together here unique and absolutely worth some thorough investigation. You’ll probably find more to enjoy each time through as more layers unfold themselves. A true underground gem.