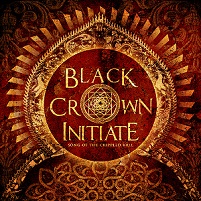 These gents won’t be unsigned for long. Black Crown Initiate, a power trio from Reading, PA, are of the progressive-minded, with deep, somewhat complex songs that provoke sentiments of a would-be powerhouse that flushed their career down the tubes, Germany’s Disillusion. Now, BCI doesn’t have the melodic reach of Disillusion on their Back to Times of Splendor album , but the holistic ideas are there in that the band casts identity upon their riffs, likes a good vocal hook/repetition (“Ghosts She Sends”), and was smart enough to employ an excellent production job for their introductory foray. Therefore, the band’s Song of the Crippled Bull EP ranks among the year’s best self-released albums.

Four songs comprise the EP, each with a different flavor, starting with the graceful “Stench of the Iron Age,” a song with lush harmonic portions, but also a seething technical gut, sort of like a honed-in Meshuggah or cyber metal approach. The death spells start with “Ghosts She Sends,” where the band has enough good sense to repeat the song title over and over, and even while the brash extremity and clean vocal happenings of “The Mountain Top” are of quality, it’s the melodic swirl of the title track – clean guitar breaks, syncopated patterns, and crunch – that wrap up what is a high-flying, can’t-miss EP. Definitely a band to watch for in the progressive metal field.