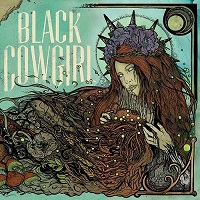 Straight from Pennsylvania Dutch country comes Black Cowgirl and their eponymous debut album. Well, to be fair, the record is a dual EP produced by the band, but now we’re just talking semantics. Although their name might be a bit misleading, there is no mistaking what these four Lancaster-bred dudes have set out to accomplish. With a keen focus on the all-important riff, Black Cowgirl doles out taut nuggets of classic and stoner rock that will surely make you want to light up a joint, crank up the lava light and bang your head till you get dizzy.

Originally formed in 2008 as a solo project by guitarist/vocalist Ben McGuire, the lineup rounded into form with guitarist Nathan Rosenzweig, bassist Chris Casse and drummer Mark Hanna. The foursome put out a six-song EP that caught the eye of local heroes CKY, who brought the boys out on a national tour. Black Cowgirl has since honed their sound, expanding on the groundwork laid by classic groups like Deep Purple and Thin Lizzy, while adding a modern-day spin by infusing some prog elements that allude to stoner/sludge titans Baroness (even the art looks John Baizley-like).

Back to the riffs, as there is no shortage of them: Each song is structured off the opening guitar lines, with McGuire and Rosenzweig providing a nice balance by either tag-teaming the same riff or playing off each other and extrapolating on the initial idea. Opener “Talk of Wolves” gets the listener into the groove before melting into the rocking “Roadmaster,” which may be the best track the band has created; the main riff sounds like something you might hear during a Sons of Anarchy montage.

The album does tend to drag a bit at times, as the band doesn’t explore a whole lot of different textures or nuances.  In addition, the vocals can get a bit dull, as McGuire suffers from the old “if it rhymes, that means its good” affliction. However, this is not to say that Black Cowgirl is not an enjoyable listen, as it definitely is. The riffs are catchy, the grooves are deep, and the production and polish are quite remarkable for an up-and-coming band.