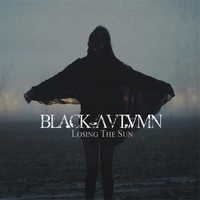 The name pretty much spells it out. Black Autumn aren’t of the sunny-day variety, in case the band’s moniker and subsequent album artwork threw you for a loop. (Doesn’t it look like the fine gal on the cover is examining her split-ends? Hate when that happens!) The German-based outfit is the product of a singular vision, Michael Krall, who founded the band in 1995 alongside TH, who has apparently fallen by the wayside to leave Krall all to his lonesome. Losing the Sun happens to be the band band’s fifth full-length, a morose, depressive mid-tempo plunder into oppressive black and doom metal.

Part-and-parcel with one dude doing everything, the production value instantly gets called into question. Since most one-man bands seem to leave quality production sound at the door, Krall has managed to cull somewhat of a clear, but rigid recording sound. The drums supply the whip-bang crash of manageable time-keeping (read: if the tempo ever broke into speedier terrain, Krall would be in trouble), yet it’s the usage of despair-ridden guitar lines that gives the album its girth, most notably on “From Whence We Came,” a tune that methodically volleys between said melodies and light piano exercises. Not counting the throwaway industrial instrumental “The Distance,” the bulk of Losing the Sun is about as comforting as a case of the flu, as evidenced by the unyielding front of downers like “St. Elm’s Fire,” and “A Corruption of Innocence,” which is probably the album’s best moment.

Losing the Sun’s thoroughly grim reflections will no doubt appeal to fans of fellow depressive BM’ers Bethlehem, Vanhelga, and Woods of Desolation. While such company may not be anywhere near the apex of the black metal genre, they fill a specific niche, something Krall and Black Autumn appear to be more than capable of based on the strength of Losing the Sun.