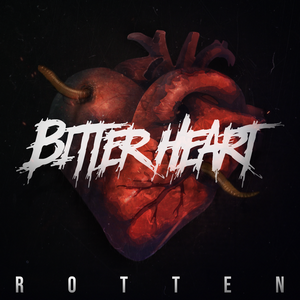 Interestingly enough, Tunisia’s Bitter Heart (which features Persona guitarist Melik Melek Khelifa) may be a shade in the heavier direction, but wouldn’t seem too out of place back in the heyday of the Seattle grunge movement. But that’s only one aspect of the band. Weaving their way through the release is also a number of more heavy metal inspirations, particularly that of the fuzzy, thundering riffage of the stoner quadrant.

An interesting blend of components, Rotten has some immediately catchy moments but still maintains a degree of metallic depth. While some of the rather grunge-oriented numbers will be the first to really sink in and hook you, such as the excellent Alice in Chains-esque “Lose Myself” or the groovy title track, heavier fans will find tracks like the fuzzy “Psychopathic Evil Woman from Hell” and punchy rocker “Kill Your Dreams” to their fancy. But what works is how they take it all in together, and incorporate these different styles without forcing it, while even blending in some nifty solo work and even some psychedelia in at times. “Cosmic Orgasmic” for instance, pulls no punches in sonic tone, but tosses in some trippy vibes as well (not to mention some vocals by Persona’s Jelena Dobric, who also contributes some keys to the album). “She Kills Me More” also stands as a highlight (particularly for those who have heard Persona’s take on the song), with an energetic chorus and just the right balancing of rock and metallic portions.

Not exactly the type of material that you come across every day in this generation, Bitter Heart takes some genuine grunge cues and brings them into today’s heavier landscape. Rotten is an addictive and enjoyable album that while initially plays off well, but it’s also one that will grow with time as you discover more of the nuances that sit below the immediately tasteful licks.