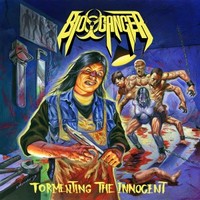 The nice thing about thrash bands is that they’re mostly interchangeable. When one breaks up or moves on to another label, there’s always another ready to step in and assume duty. Granted, things aren’t as bad they were seven or eight years ago when you couldn’t walk down the street without being mugged by some Johnny-come-lately wearing a jean jacket, high-tops, who had just caught wind of Bonded by Blood. Those were terrible times. (And yes, we’re 100% exaggerating the mugged part, although it would be funny.) Anyway, with Havok now off and over to Metal Blade, the always-reliable Candlelight has filled the gap with a Greek thrash band, Bio-Cancer, whose sophomore Tormenting the Innocent doesn’t quite replace the Denver thrashers, but it’s not a bad attempt.

In relative terms, the band is pretty fresh-faced, having formed in 2010. This would suggest they missed the big thrash revival run by a few years, or, figured that thrash was their quickest ticket into underground notoriety. Either way, the band’s patently extreme thrash sound is somewhat worthy, most notably on the blasting “Chemical Castration,” where obvious death metal elements infiltrate the band’s pretty standard thrash sound. It’s a Destruction-like move, though, and is further amplified on the ensuing cut, “Haters Gonna…Suffer!” which beats the hell out of any number of cliché thrash song titles that are part-and-parcel with younger bands.

If there’s one enticing element with Bio-Cancer, it’s probably vocalist Lefteris, whose poor larynx will probably be in tatters in a few years. But on record, he’s absolutely demented and personable, the exact kind of vocalist a band like Bio-Cancer would need in order to swim out of the thrash muck they’re certain to find themselves in. This, coupled with the spare death metal happenings, make Tormenting the Innocent, passable, if not promising.