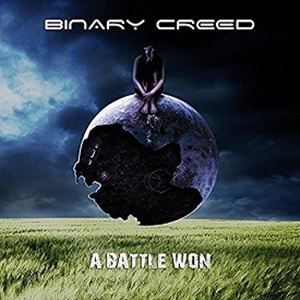 Per capita, you ever get the feeling that the metal gene courses through most Scandinavian musicians during childhood, festering until the adrenaline and excitement can no longer contain itself? Hailing from Sweden, Binary Creed started in 2013, releasing their debut album Restitution a year later for Nightmare Records, and now gaining the interest of a new label for their follow-up A Battle Won. This scribe’s first exposure to the band, you’ll get a ten-song conceptual effort (about war, blind obedience, and taking a stand on oppression and violence even at the risk of the cost) that speaks to the power/progressive metal landscape in a versatile, engaging, and somewhat melodic stance compared to many of their peers.

Musically Binary Creed glide between that late 80’s power/progressive stance in metal along with a touch of modern heaviness. You will not mistake them for the fastest or flashiest players in the business – although there are bursts of frantic lead spurts or instrumental sequences that heighten atmospheric shifts best shown on “The Fallen King”. Guitar harmonies abound to match the higher falsetto range of Andreas Stoltz – who may seem familiar to long-timers if you remember the band Hollow who had a couple of unsung power metal albums on Nuclear Blast in the late 1990’s. After a second pass at the record, the addictive mid-tempo stomp of “Safer Than Now” stood out on its Morgana Lefay-ish riffs, the keyboards giving the material that additional propulsion while Andreas goes from second to fifth gear through some of his sustained screams (think Niklas Stålvind of Wolf/The Doomsday Kingdom for vocal comparisons). Haunting choir background passages and clean/bass emphasis allow the doom-oriented “A Better Man” to become another sensational arrangement, turning the prototypical power ballad template on its ear.

You don’t hear many bands that embrace a sound that reflects early Savatage, Queensrÿche, and those offshoots quite like Binary Creed these days. A Battle Won contains plenty of tasty riffs, solid grooves, and golden melodies that rise to the occasion – so those yearning for something that has that 1987-1990 power/progressive metal character, this would be an adequate addition to their collection.