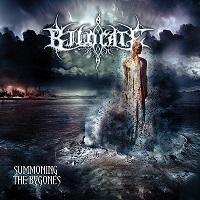 The Middle East isn’t a geographical area that metal seems to bleeding from. Quality bands are few and far in between but when they hit, they hit hard. Case in point, this stunning release from Jordan sextet Bilocate, titled Summoning The Bygones. An enormous, intricate, and exhausting 75-minute showcase of progressive death metal, Bilocate hits absolutely every note right a band could possibly hope to in this style. The results speak for themselves with songs that are luxuriously sprawling and melodically insane. There are a handful of Still Life/Blackwater Park Opeth moments on display, showcasing if nothing else, those albums lasting waves upon the scene, but these are but a minor few occurrences in what is otherwise a tremendous journey by one of the most unique forces in melodic death metal.

As is common with many bands from the region, a soft and melodic guitar bit opens up the album with “The Tragedy Within,” escalating into a pulsating oriental groove before morphing into an unrestrained metal onslaught. Soaring leads, constant synth and piano work, and a surprisingly relentless bass presence define not only the song but the album in its entirety, the nine minutes filled end-to-end with varying directions, flavors, and intentions. The guitarists are dominant throughout with their lead and solo work, serving as the centerpiece of every movement that makes up “A Deadly Path” and “Hypia,” the latter of which also features the vocal work of Dan Swanö and is absolutely stunning – it’s absurd.

A cover of Paradise Lost’s “Dead Emotions” goes much as expected given the pervasive melodic guitar work present elsewhere on the album, crunchy and gorgeous. “2nd War In Heaven” features what might be the albums only malevolent and most aggressive death metal moments, but not even here can the music go without melodious sections for long! Three-part closer “A Desire to Leave” encapsulates everything about the album and sends it off in triumphant fashion with a whirlwind of shifting directions, ultimately ending in a quiet fade out. In ways something of a middle ground between geographical cousins Orphaned Land and Sonne Adam without sounding like either, Bilocate takes zero prisoners on Summoning The Bygones. Triumphant from start to finish!