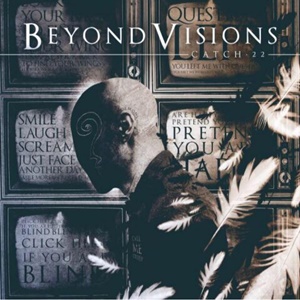 Together for a decade, Swedish act Beyond Visions have released two demos and an EP prior to signing with Sliptrick Records for their debut full-length Your Face is Familiar in 2013. In the four-year interim between releases, they’ve secured a fresh rhythm section since 2016 and embark on a new deal with Bleeding Music for the follow up Catch 22. After a few spins the quartet possess an alluring, modern take on the gothic/melodic metal scene that contains many electronic/cyber keyboard and rhythm spots that bring the pop factor to their hooks up quite a bit, sure to elicit proper jumping and sing-a-long propensities.

Carefully developing spots where they use more of a tender, atmospheric restraint that conveys a love of 90’s gothic metal (or sometimes a touch heavier), when airing “Changes” and driving double-kick oriented “My Life” you understand the band may live in the modern age, but still comes from a metal stance first. At other times, the main keyboard/guitar passages sit in semi-progressive meets power lines, where feelings of Dream Theater or Sonata Arctica draw fair comparison when you check out the main theme of “Everlasting” or the faster, uplifting nature to closer “Good Hate” – where vocalist Rebecka Heijel gains the chance to execute her angelic, floating upper register in resplendent glory against some killer, racing riffs that veer into melodic death territories. And of course, there will be some Amaranthe shades when you take in the stunted cyber keyboards and alluring poppy choruses during the opener “Time to Rise” and the follow up “Sacrifice” – but Beyond Visions gain major points for not relying on one method of songwriting to develop their hooks, as this multi-layered approach keeps the album moving along briskly.

Rebecka vocally engages from that pop/melodic side first and foremost – it’s obvious she respects artists like ABBA, Roxette, and others in the Scandinavian music field when you hear the phrasing and harmonies that take place for “Pay My Price”. Catch 22 as a result contains strong musical interplay and proper melodic qualities to gain favor from numerous sub-genres across the metal spectrum – placing Beyond Visions in good company for wider appeal.