Beyond the Black – Lost in Forever (UDR Music) 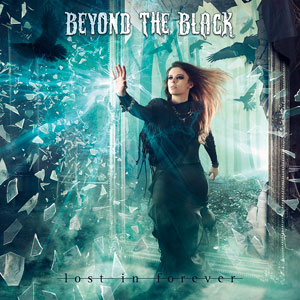 One band that seems to be generating more and more momentum is that of Germany’s Beyond the Black. The female-fronted symphonic act released their first album in 2015 (Songs of Love and Death) and then turned around one year later and released Lost in Forever. Now the band has signed with UDR Music, who decided to re-release last year’s album, complete with 4 new tracks.

For those not caught up with the band, they play directly into the hand of bands such as Within Temptation, Delain, and Xandria – you know the drill. Not that it’s a bad thing, as Beyond the Black bring some of their own spices to the mix and possess the necessary passions to make the whole album a fun one. There are some more rock-ish influences that land with the symphonic ones, making the band an easy to digest one, even if you sit on the hard rock side of the fence. There are some punchy and energetic tracks like “Nevermore” and “Dies Irae” that will remind you that they can bring the heaviness/epic factor up when needed, whereas “Halo of the Dark” and “Against the World” will show off their knack for catchy melodies and choruses. Both of which are a fine showcase for what vocalist Jennifer Haben can do, alongside the acoustic (original) closer “Love’s A Burden.” A solid duet with Rick Altzi on “Beautiful Lies” and the slight Celtic flavor of “Beyond the Mirror” round out some other highlights. Then, of course, there are four added tracks, which seem to mirror the diversity represented on the rest of the tracks, with the slightly more bouncy/poppy “Dim the Spotlight” coming across as the strongest of the batch.

It’s to the band’s credit that this 17-song, 78-minute album doesn’t get tiring over the course of multiple listens. That factor, more than anything, speaks to Beyond the Black’s ability to craft some strong songs, even if the particular genre is one that is increasingly trafficked. Hopefully this re-release will get them the added exposure on this side of the Atlantic to match that of Europe.