Beyond Extinction – The Fatal Flaws of Humankind (Self-Released) 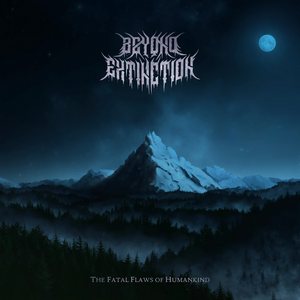 A new death metal act from the UK, The Fatal Flaws of Humankind is the first EP for the young act. And by young, this is a literal piece as the members here have an average age of seventeen. With some of the deathcore influences, one might expect an offering that is more lacking, but Beyond Extinction take things in a groovier and more old-school direction than what one might expect. Something that should give them some wiggle room in a crowded scene.

Citing influences like Fit for an Autopsy and Thy Art is Murder, Beyond Extinction’s sound is thankfully not that of a mere knockoff. You can certainly hear the sound of both acts at various points but there’s an equally enjoyable bit that feels more akin to something like Obituary rearing its head from time to time. While the deathcore riffs and chugs can rage, again thankfully never being slave to being tossed into a ‘breakdown for breakdown’s sake,’ there’s a slower and groovy side that consistently shines to shift the dynamic. The guitar tone here is quite heavy, and the rolling chugs of “Bones Like Branches” makes that clear quite early on. But almost gloomy touches and burly grooves later on feel more legitimately death metal than ‘core, with just the right amount of rumble for you to take notice. The later parts of “A Face Without Features” also echo a similar sentiment, with slow crushing grooves that yearn to peel the paint off the walls being one of the EPs strongest highlights. There’s no reliance on brute speed to get the band into a blur, and that feeling of control and groove is admirable for such a early release in the band’s career.

Beyond Extinction succeed in providing a modern death metal experience that isn’t too tethered into the current trends. It pulls from the past and present when it comes to heavy riffing, which should be a good launching point for the act to become more successful in their own future. The Fatal Flaws of Humankind is a strong starting point.