Beyond Belief – Rave the Abyss (Hammerheart) 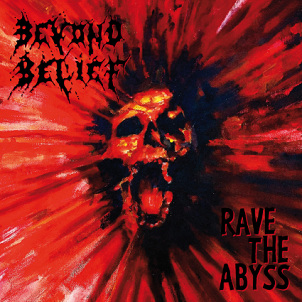 From the “What can we dig up next?” file comes Dutch classic death metal throng Beyond Belief. Formed in 1986, the band took their sweet ‘ol time in releasing a full-length, the first being 1993’s Towards the Diabolical Experiment. That, along with its 1995 Rave the Abyss follow-up are being reissued by Hammerheart, providing a glimpse into an era that was simply flooded with bands of a similar approach. The mid-’90s may have been the most convenient time to be a death metal band, but that doesn’t mean everything was of value. Beyond Belief, however, appear to have been several years ahead of now-popular death/doom style, thus validating the reissue of their catalog.

The Euro approach has often favored feel over technicality, something that is reflected in Beyond Belief’s sound. It may sound a bit much to say not a note is wasted here, but the manner in which cuts like “Cursed” and the ultra-chunky “Blood Beach” roll along makes it obvious Beyond Belief were more concerned with dynamics, bruising riffs, and the brutish vocals of A.J. van Drenth. Proper doom territory is traversed on “High on the Moon,” which floats crushing, slow-churned riffs with ease, while simple, if not refined death metal is explored on “The Grand Enigma.”

For all intents and purposes, Beyond Belief are a fundamental, orthodox death metal band. You can’t really draw it up any more precise than these gents. Since Rave the Abyss was probably caught up in the aforementioned death metal quagmire (being a Dutch DM band may have hurt their visibility, too), having it reissued and sent back into the world was a fine idea from Hammerheart.