Between the Buried And Me – The Parallax II: Future Sequence (Metal Blade Records) 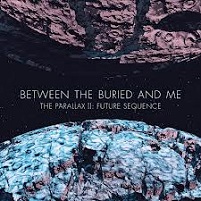 Earlier this year when The Contortionist released Intrinsic, I thought to myself (and a couple friends) had Between The Buried And Me been bested at their own game? Changing the neo-progressive game with Colors in 2007, the band’s new-found love at the time for all things hyper progressive and everything + the kitchen sink songwriting mixed well with the band’s inherent hardcore/metalcore past and created something fairly unprecedented.

This sound was tremendous and unfortunately didn’t work out quite as well when the band used a similar mentality when producing The Great Misdirect a couple years later, seemingly even the band was aware of it, getting to work quickly on the first part in the Parallax story, last year’s three song EP The Parallax – Hypersleep Diaries. Setting the stage for a colossal and multifaceted concept album to come, the EP restored anticipation, but given everything, would the band deliver? After ample time with the 74 minute prog paradise that is The Parallax II: Future Sequence, the answer, in short, is shit yeah! Long the sticking point for many throughout the Colors era – the need to Frankenstein 4000 ideas together in every ‘song’- is absent here. Those days are over, the music on hand centered on a particular thematic core and while executed with all the familiar trappings of prog excess, are none the worse for it, everything branching out from and returning to the album’s central sci-fi theme. Instead this time around minor motifs are brought up and revisited across the duration of the album, showcased somewhat in album bookends “Goodbye to Everything” but showcased in each of the larger tracks throughout.

Pre-release single “Telos” made for a questionable and somewhat disjointed sounding single but fitting perfectly within its place in the running order, though it’s hard to imagine any of these tracks taken out of context making much in the way of sense. The metallic crunch that has been the band’s staple band’s mainstay since inception is still here in the album’s meatier numbers, take your pick from 10 minute monsters “Lay Your Ghosts to Rest” and “Extremophile Elite.” The familiar marriages of ridiculous riffing and drumwork are all over the place, anchored by a more resilient and solid keys sound, especially on the smaller interlude-like tracks that fill in the gaps between the larger numbers.

Prime-era Dream Theater-styled breakdowns do make occasional appearances amidst all the blasting and screaming, the band sinking into these often off-kilter moments easier than ever before. After all one of the highlights for many fans of the band over the years hasn’t been their patented metal attack, but instead the luscious and at times all-too-brief excursions into extreme melody that the band has so wantonly thrown themselves. Here more than ever these clean breaks are as multi-textured and sublime as ever, guitar leads and the grin-inducing bass playing coming to the fore as pristine voices of melodic expression, most readily in the very Chrono Trigger (nostalgia that) sounding break in “Melting City,” its lengthy midsection outright trance inducing.

It is of course this commitment to an overall theme that perhaps more than anything pushes the band past anything its ever done before, this new found focus on one end (in lieu of 240) allowing them to exercise their already tremendous muscle in hereto unheard of ways. The results in following the concept album…concept, are exhaustive and phenomenal.

The results are nothing short of breath taking. When the crushing conclusion of the 15 minute behemoth “Silent Flight Parliament” rolls around, so much has been covered it’s difficult to wrap the brain around what it. This time around though it’s because of the densely packed focus, not the over application of disparate ideas. This isn’t to slight the band in any way for era, only that now, in this iteration, they’re firing cylinders and existing on a plane it’s unsure if they even knew they were capable of. The growth of the band has been steady across for the most part and on The Parallax II: Future Sequence the band has set the bar for themselves and everyone else at a nausea-inducing height. Fucking fantastic!