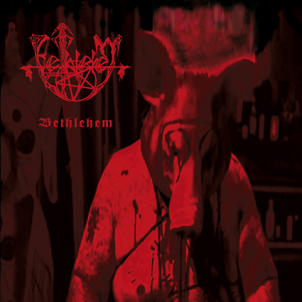 Bethlehem’s first three albums—1994’s Dark Metal, ‘96’s Dictius Te Necare, and ‘98’s Sardonischer Untergang im Zeichen irreligiöser Darbietung—gave the band creative license to do as they please. During that illustrious run, the Germans became the standard bearers for demented, suicidal black metal. They weren’t following the template laid out by the Norwegians, though, but rather carving out a schizoid sound that earned them a cult following. Bethlehem’s output since the early ‘00s has been scattershot (how could one forget the title for 2014’s Hexakosioihexekontahexaphobia?), yet with their new self-titled effort, there’s an apparent focus that brings it all together.

“Deranged” may be the appropriate term to apply to many of the cuts here, as the vocals of Onielar (real name: Yvonne Wilczynska) not only provide a shrill feminine angle, they also add a certain degree of weirdness, as found on “Kalt’ Ritt in leicht faltiger Leere.” Onielar gets plenty of face time, employing demonic cadences and harsh spoken word bits. Through this, the psychotic angle to “Gängel Gängel Gang” and the barreling “Verderbnisheilung in sterbend’ Mahr” are heightened, the latter emerging as the album’s most notable throwback to the band’s marvelous 90s era. (Also, kudos to the Type O Negative homage on “Arg tot frohlockt kein Kind.”)

The degree in which black metal and its subsets have been mangled and thrown to the outer reaches is nothing new. Bethlehem—as under the radar as they may be—are partially responsible for such excursions and have faithfully managed to recreate here in what is probably their best showing since Sardonischer Untergang im Zeichen irreligiöser Darbietung. In truth, those who think the Swedish Shining and Lifelover are the most messed-up black metal around have got nothing on Bethlehem.