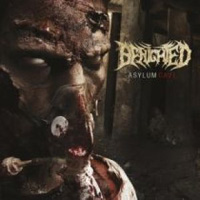 If you really want to ruffle the feathers of your audience, then start your album with the sound of an alarm clock going off…that’s real horror for some people. Frankly, the morning is the best part of the day, but that’s neither here nor there, now is it? Anyway, France’s Benighted start their sixth album Asylum Cave with that very sound, launching into an extreme hybrid of death metal that is simply bone-jarring. It’s virtually a composite of all that is going down in DM right now, even managing to make some Slipknot-like moments sound passable.

Guest vocals from members of Aborted and Devourment notwithstanding, the basis of Asylum Cave is rooted in the brutal, riff-based realm that emphasizes thick and chunky riffs, as evidenced by album opener “Asylum Cave” and “Let the Blood Spill Between My Broken Teeth.” Even the modern bounce (i.e.Slipknot, like we mentioned above) gets a workout on “Fritzl,” a song that volleys between bouncy and mosh-happy riffing and Decapitated-like tactics.

The full palette of death metal is explored on the back-half of the album, with “Unborn Infected Children” sounding like a more inspired Despised Icon, while the Fear Factory swerve of “A Quiet Day” was an initial surprise, only until the “bree-bree” vocals made their way in. To top things off, grindcore is explored on “Swallow,” proving that Benighted are simply not content with sticking to one style.

Albums like this in death metal are usually the sonic equivalent to a sloppy mess. While most bands tend to over-extend themselves in pursuit of technical exploits, Benighted’s simple, yet very effective way of approaching riff-based death metal reaps multiple rewards on Asylum Cave. In terms of cohesive and engaging death metal albums to hit the market this year, this is certainly one we’ll pointing for the rest of the calendar year.