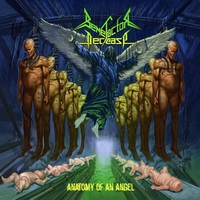 Fortunately choosing to not judge an act on name alone (the English major in me hit the stun pose at the nonsensical Decease… archaic versus the proper Deceased), this Greek quintet started in 2007, releasing a series of demos, EP’s and split efforts before placing themselves in a three year holding pattern. Due to inevitable military/government regulations plus health issues, 2010-2012 flew by without any action. Back together again, we now have the debut Benefactor Decease album in Anatomy of an Angel – digging a little deeper into the depths of semi-technical, extreme thrash and certainly stirring up action through the cauldron of adrenaline oriented arrangements.

The serene 61 second “Intermental Excitation” (living for the thesaurus perhaps?) gives way to a frantic musical explosion as the stop/start speed trilling parade begins for “Electrical Death”, and it’s quick to aurally appreciate the fluid, progressive bass tricks from Apollo (possibly the Steve Harris of thrash) and unbelievably quick riff action that should remind most of early Rigor Mortis or Darkness Descends/Leave Scars-period Dark Angel. Two bass solo segments including some layered harmonies in a six-minute song could be a tad excessive, but you might as well go all in to impress. Machine gun snare hits against a dual wall of axes makes “Chronicles of a Paraphiliak” another highlight – everything from a stuttered narrative conclusion straight out of Shakespeare’s Julius Caesar to rapid fire word spew plus a thoughtful short dual lead break keeps interest high for a seven-minute track.

Crossover aspects come into play on occasion through gang infested vocals – or a quick hitting cut like “The Finest Form for Body Modification” that intertwines punk, speed, and thrash parts all under two minutes that could appeal to Municipal Waste fans as easily as Razor mongers. Spacing out longer numbers with conventional, shorter cuts gives the listeners and musicians value in the variety. When the band choose to keep certain sections under mid-tempo thrash terrain, that’s when a lot of the catchier and more melodic moments come up – “Abandonement to the Hanger” filled with a lot of axe air simulation parts that harken back to Coroner.

Curious to hear where Benefactor Decease develops as the old ‘lifetime to create your debut album’ comes to mind for future output. At least Anatomy of an Angel isn’t a Bonded by Blood cut and paste simulation – and sure to appease a lot of musically inclined thrash heads who miss intelligent lyrics plus vicious, relentless song content.