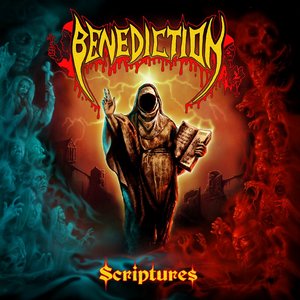 An act that some newcomers may have not been engaged with, as their last album was 2008’s Killing Music, Benediction was an early staple in the ‘90s death metal scene. Some fantastic song-oriented death metal aggression could be found in their material, such as Transcend the Rubicon and The Grand Leveller, and it’s that same furious spirit that embodies the band’s triumphant return in Scriptures.

Outside of the upgraded production standard (that still feels vintage in some elegant regards), Scriptures feels like it could have been released in the band’s ‘90s heyday. That blazing forward feeling, something that Benediction and other acts like Bolt Thrower championed, is here in full swing. It’s energetic, and most importantly, the riffing is what makes it feel so alive. Opening up with “Iterations of I,” it works to knock you over like a wrecking ball with bursts of speed and chaotic riffs that stick with you. The buzzing sound and visceral melodies, accompanied by some driving tempos, is enough to get you up and moving. There’s an urgency to it all, even in more mid-tempo cuts like “Progenitors of a New Paradigm,” where steamroller riffs are the norm, but they stick with you. Perhaps it’s the almost punk edge to some of the riffing, but Benediction manages to stay fully capable in their lethality of death metal, while giving you riff after riff of top shelf quality. “In Our Hands, The Scars” for instance, stands out as one of the most pit-friendly tracks, with a monstrous mid-tempo section that your neck will surely appreciate if it needs a workout.

A welcome, and long-awaited return from a death metal act that is all about the song. Scriptures rips from beginning to end, and captures the essence of Benediction’s finest works in the process. If you’ve skipped out on the band in the past, this is a fine introduction (or re-introduction for old fans). Pure bludgeoning, meat & potatoes death metal at its finest.