Beneath The Machine – Infection (Self-Released) 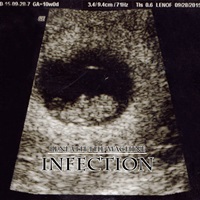 Going since 2010 and expanding from their three-piece beginnings into the current five-piece incarnation, Beneath The Machine from Massachusetts issues a lengthy full-length in the form of Infection. Two years in the making and ambitious in the sense that consumers will get 18 songs and over 74 minutes of material to consume – many will wonder if as an unsigned artist this could be slightly overstaying the welcome, when other acts feel content to issue four-six songs at a time. While Soilwork and Swallow the Sun are two bands that put the multi-studio album concept to fruition and reasonable success in recent times, it doesn’t appear based on my few passes that Infection comes close to that originality caliber.

Stylistically Beneath the Machine incorporate a diverse selection of death, thrash, black and groove metal influences. Lead work pops in and out of “Onslaught”, sometimes more melodic a la Savatage and at other times chaotic, the a cappella vocal ending gives the song a Viking touch. The follow up “FullGoreDeath” contains some interesting, almost semi-dance/groove tempo patterns against a rhythmic riffing template, while violin strains factor heavily into the hook of the song. One could imagine this being an audience favorite because of the interactive moments, including some interesting narrative samples against the varied screams and conventional growls. The blackened elements come in the form of many of the high-pitched scream choices during the outer-space oriented “Interstellar Xenocide”, while other vocals are firmly entrenched in that lower growl from the swamp camp – discernible yet rather monotonous as you hit the halfway point of this record.

For my tastes, Beneath the Machine succeed when they choose to go into more of a doom/groove metal stance, where they incorporate keyboards or extra nuances to set the mood or tone as something more distinct that just run of the mill death/blackened thrash. The evil guitar riffs and keyboards against the computer enhanced vocals for “Creature” make this another standout – an amalgamation of Amon Amarth, Candlemass, and a bit of Machine Head. “Yggdrasil” flexes more of their epic touches, the slower double bass working to their favor – the off key clean vocal melodies not so much. The clickety-clack kick drums could present ear fatigue as well, which again introduces the theory that possibly issuing less material on a more frequent schedule could have been a better option – allowing the band to concentrate more on production values.

Infection carries more weight as a solid 35 to 40-minute record of possibly 8-10 tracks. Instead Beneath The Machine creates a mish-mash of epic blackened groove-oriented death/thrash with occasional keyboard/violin twists that haven’t quite settled into something distinct – potential is present, it’s just a matter of how many people are willing to dig out the treasures amidst the multitude of songs. Maybe the young band will smooth this out as time passes on.