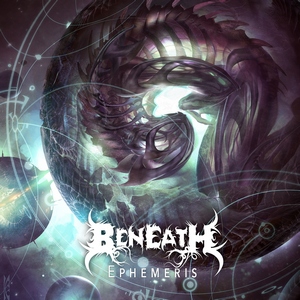 Returning after 2014’s The Barren Throne, the Icelandic death metal squad of Beneath is now ready to unleash their third outing of brutal death metal. Some notable changes have occurred, with the band pushing forth a more straight-ahead brutality into their quasi-technical approach. Turns out, it’s truly for the best.

Beneath have always been about the brutality, with easy comparisons to bands like Suffocation or Hour of Penance coming to mind when hearing their music. Ephemeris merely ‘sharpens the blade’ so to speak. Whereas The Barren Throne was 52-minutes, Ephemeris clocks in at about 37. Thus some of the fat has been trimmed away, leaving behind a more aggressive and insidious version of Beneath. “Constellational Transformation” starts things off right the way you’d like to hear – technically-driven riffing that can escalate quickly, surrounded by some rather brutal grooves. “Medium Obscurum,” the album’s shortest track, particularly revels in the blunt assertion of heaviness. That’s not to say that some of the band’s progressive and melodic leanings have been tossed aside. “Alignments” is as eerie and atmospheric as anything else the band has produced, and the standout “Cities of the Outer Reaches” blends together some bursts of speed with more melodic underpinnings to show the band at their best. The slow, crushing start to “Amorphous Globe” is yet another example of how the band uses a variety of tempos in their arsenal to keep things feeling fresh. Lastly, session drumming from Mike Heller (Fear Factory, Malignancy) gives the band some rather phenomenal moments behind the kit, with Heller doing a great deal more than simply blasting the day away.

Explosive, and sometimes surprisingly catchy, Ephemeris is some of Beneath’s finest material to date. A slim and focused release that allows the brutality to flourish without fear of numbing the listener’s senses, it’s ultimately the marriage of steamrolling aggression and sly melodies that give the band their strongest weapon.