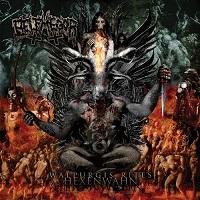 Gotta hand it to these Austrians – they’re awfully productive, as it feels like last year’s Bondage Goat Zombie (great title, by the way) is still fresh in a lot of our minds. The short lag time in between albums definitely does not cheapen Belphegor’s output; rather, they continue to construct these mini, yet monolithic death/black hymns that are infused with the band’s indelible character. That being said, Walpurgis Rites – Hexenwahn is perhaps the band’s most searing record since they hooked up with Nuclear Blast.

Walpurgis Rites – Hexenwahn succeeds where Bondage Goat Zombie and 2007’s Pestapocalypse IV fails primarily because the onus is more on frenzied melody, which prompts the band to rely more on its death metal side. Cuts like opener “Walpurgis Rites” and “Veneratio Diaboli – I Am Sin” are laced with rash, speedyguitar

melodies, of which work to embellish the more straightforward nature of the album’s nine songs.

Additional highlights include the blackened intensity of “The Crosses Made of Bone,” the Morbid Angel-esque slant of “Hail the New Flesh” and closing salvo, “Hexenwahn – Totenkult,” a number that will emerge as one of the most epic in the band’s decade-plus pantheon.

As much as the band has missed the mark in the past few years, there’s always been this encouraging facet to Belphegor. Not in the sense they’ll become the next Behemoth, but the notion they could properly align their chaos-on-ten-plus-melody angle was always there. Walpurgis Rites – Hexenwahn is the realization of that.