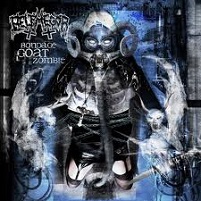 Last year’s Pestapocalypse IV from this Austrian duo was all-in-all, underwhelming. For a band that has made its work in the black/death realm, said album tapered off pretty quickly, so off went Belphegor back to work, returning with the much better and more vital, Bondage Goat Zombie.

Falling more on the death metal side of the table, Bondage Goat Zombie (great title, by the way) is characterized largely by the band’s knifing melodies. Sharp and edgy, Belphegor’s melody selection during cuts such as “Bondage Goat Zombie” and the outstanding “Stigma Diabolicum” thrust these numbers into new, exhilarating terrority for the band. When merged with the crazed blasting of drummer Serpenth, the band’s fuck-all speed template shoots through the roof.

Even with these excellent, feverish melodies floating about, Belphegor still tends to shoot itself in the foot with sleazy, dumb-downed numbers like “Sex Dictator-Lucifer,” which does itself no favors thanks to the inclusion of sound samples of woman moaning in delight. Very obvious and dumb, gentlemen.

If Belphegor were to accentuate on the jet-proppelled frenzy of the aforementioned two cuts and the just as formidable “Shred For Satan,” there is no telling what the band could accomplish. For all we know, they could be a better, more listenable version of Angelcorpse, proving that when the afterburners are turned on, melody and cohesion don’t have to be an afterthought. Next time, eh?