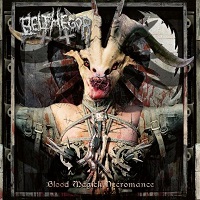 Come to think of it, is there a more hard-working band in the extreme metal sphere than Austria’s Belphegor? They put an album out nearly every year, tour their assess off, and there’s nary a dip in quality, with the album in question, Blood Magick Necromance being perhaps their most enticing to date. Plus, having super-producer Peter Tagtgren (Hypocrisy, Immortal, etc.) man the production board is a total win. It’s like 1997 all over again.

The band’s hybrid of black and death metal has never been a secret, and while they routinely blur those lines, there’s a steady diet of jet-propelled riffing, only it’s balanced out by slower tempos, just check out album highlight “Rise To Fall And Fall To Rise,” a song

that recalls the mesmeric period well over a decade ago when melody was used a means to achieve atmosphere. That approach is used again on “Possessed Burning Eyes 1997,” which we’re guessing is an homage to the band’s formative years.

Tagtgren’s production job is a total throwback to the man’s glory period of producing (1996-2001), processed Abyss Studios drum sound and all. So when the Austrians do decide up the tempo and go for broke like on album opener “In Blood – Devour this Sanctity” and the ripping closer “Sado Messiah,” the black metal undercurrent the band hides so well can’t help but come out and tear one’s head off.

Rapidly becoming a renowned force in the underground, the stars appear to be aligned for Belphegor to have a breakout year in 2011. Blood Magick Necromance is not an album to be taken lightly; rather it’s the type of album built to last in today’s frenzied underground. The band is clearly hell-bent on outworking everyone, and at last, they have the album to play with the big boys.