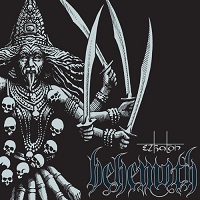 Odd sight seeing the Poles on Metal Blade, this, after an immensely successful run on Century Media where the band for all intents and purposes, was shot into the extreme metal stratosphere. Now on a much deserved break, we get the stop-gap Ezkaton EP, a collection of re-recordings, covers, and live tunes, all done in the now-renowned fervor and intensity Behemoth is known for.

Leading things off is a re-recording of “Chant For Ezkaton 2000 e.v.” originally heard on the band’s Thelema 6 effort and new tune, “Qadosh,” which was a leftover from the Apostasy recording sessions. “Qadosh” falls right in line with a lot material from said album, with a preponderance of blasts and evil, sinister melodies.

Covers of The Ramones’ “I’m Not Jesus” and Master Hammer’s “Jama Pekel” are tolerable and well-performed, but don’t really seem to fit with the whole attitude and aura of Behemoth. Guess that’s what an EP is for.

Next year will bring a new full-length and if bets are on, we’re thinking Nergal and co. will bring on another stormer. For now, Ezkaton will satiate only a select few, but again, it has served its purpose.