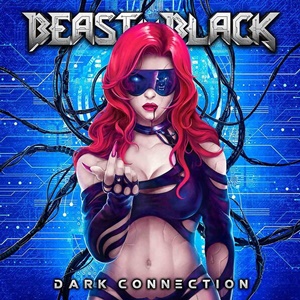 Creating a sound that is infectious as a melding of power metal with 80’s hard rock and video game, anime, and soundtrack/pop reference points, Beast in Black have established a quick hitting discography that has taken a lot of the world by storm. Arriving at the third album for Dark Connection, guitarist/ main songwriter Anton Kabanen and his compatriots made even more of a conscious keyboard-oriented effort this go around, befitting of the mix of cyberpunk/homage to specific sci-fi /action-adventure movies plus the tried and true anime series influences that comprise much of the lyrical content.

It’s often the little details that pay the biggest dividends for solid hooks and instant retention track to track. They could be little computerized vocal effects and electronic drum hits during “Revengeance Machine”, narrative sequences that set the stage for a triumphant keyboard-lead as in “Highway to Mars”, all the way to a somber, momentum building ballad for “My Dystopia” that should have crowds swaying at all the right places or humming along to the main musical earworms. When the group wants to fire out the Accept-ish guitar charm, it’s in a mid-tempo, steel-laden form where “Bella Donna ” aligns, the chorus bristling in the right ABBA-like motif. On the other hand, if you want a potent rhythmic jolt that comes from that Gary Glitter meets W.A.S.P. terrain, well “Hardcore” hits all those boxes – the playful and stellar delivery of vocalist Yannis Papadopoulos with ‘I am the whiplash – you are the thunder’ a rallying cry for all headbangers. The band just live for the best combination of highlight reel riffs, fleshing things out with focused dynamics and impact, and then move on to the next idea. Three of the songs are a return to Anton’s love of the Berserk manga series, of which “Dark New World” containing a mix of those Euro/Italian disco accents intertwined against power chords and high pitch melodies turns out to be another favorite. The closing two covers of “Battle Hymn” and “They Don’t Care About Us” illustrate the band’s love of classic metal and the King of Pop – turning them both into Beast of Black-oriented material that gives those original artists proper reverence for their contributions to the musical landscape.

Beast in Black isn’t going to turn the world upside down in terms of musical experimentation – they play to their strengths and make records that are just plain fun to consume and put on repeat. Dark Connection is another winner in that regard. 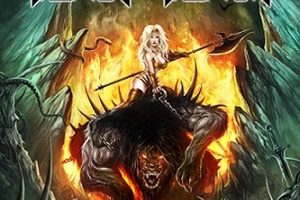 February 2019 Album of the Month: Beast in Black’s From Hell with Love

Beast in Black – From Hell with Love (Nuclear Blast)