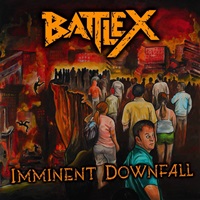 Slovenia in Central Europe is a country this scribe has not really been privy too much as far as heavy metal output. So it’s a welcome sight to be exposed to new material from this country, especially when looking at the quartet BattleX who have been slugging things out since youngsters in 2007. Interestingly noting in background descriptions premiere singing moments outdoors in 32 degrees F weather for rhythm guitarist Jaka Črešnar as well as bass shaking foundations and vocals ripping through brains like chainsaws, the band has gone through its fair share of lineup changes and songwriting development, issuing The Point of No Return EP in 2010 before this debut full-length dropped six years later.

After a few serious spins, Imminent Downfall has qualities that can appeal to both heavy metal and thrash listeners – yet BattleX struggle to bottle up all of the best hooks and melodies into consistently memorable, engaging songs. The lead breaks from Filip Gornik prove he has studied his craft – peeling off mesmerizing taps, bends, and energetic passages during “Circus of Trust” and the more subdued, straightforward anthem “Raise Hell” that show he knows a lot of Hammett and NWOBHM classic technique. Throwing down double bass and heads down Kill ‘Em All riffage for opener “Break Your Bones”, BattleX certainly has more than passing affinity for Metallica beyond the aggression and spirit of those 80’s pinnacle thrash records throughout the ten cuts- the back and forth gang choruses sure to align well with audiences when performed live. When the band choose to go heads down for triplet action as the majority of “Face to Face” delivers, BattleX is at their best – mirroring the early work of Evile where proper tempo changes and intuitive riff construction makes sense along with little harmony nuances.

Jaka as a vocalist is adequate but not earth shattering – a hoarse, mid-range rasp that surely will gain Hetfield comparisons where in more of the ‘singing’ portions of “Dignity” can be taxing to hear as the limitations are front and center. BattleX do not remain stagnant in one speed or style of song – making the more tribal/progressive sections of the closing title track intriguing and giving the band something to possibly expand upon on the follow up. Don’t get the cover as well (the Antonio Vonde oil painting doesn’t seem realistic to these eyes, although the band logo is cool), so in the end Imminent Downfall showcases BattleX as a band with obvious playing ability, now it’s all about harnessing things away from obvious Metallica comparisons and into their own entity.