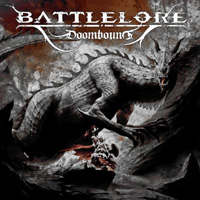 In a career marked by consistency and all things Tolkien, Battlelore forge ahead on Doombound, the band’s sixth album. While previous efforts including 2008’s hearty and valiant The Last Alliance were chomping at the bit to demonstrate the aural zeal that comprises the oft-forgotten “battle metal” style, Doombound displays a more concerted, almost methodical version of the band, resulting in a solid, but middle-of-the-road album.

The dueling vocals of Kaisa Jouhki and Tomi Mykkänen still take precedence in Battelore’s symphonic metal landscape. Neither trump the other; rather they’re complementary parts, with Jouhki providing the soft tender angles, and Mykkänen ramping up the sharp edges, something that comes to the fore on album highlight “Iron of Death.” It could be said Jouhki could be used more effectively, as she often has to give way to Mykkänen’s feral bark after the grinding portions exhaust themselves (i.e. “Bow and Helm” and “Olden Gods”).

For the storyline, Tolkien’s tragic hero Túrin Turambar (who appeared in The Children of Húrin, a story written shortly after the death of Tolkien’s son) is the point of discussion, although it’s going to be difficult for non-Tolkien enthusiasts to latch on. However, the band do their part in bringing some semblance of the story to life via several peaks and valleys, whether is on the balladry of “Enchanted,” the sinewy “Fate of the Betrayed” and heroic “Last of the Lords.”

Not really the acquired taste they should be, Battlelore proves on Doombound that fantasy metal can be easily digested, even with an unfamiliar storyline. In terms of where this ranks in the band’s above-average discography, Doombound doesn’t quite match up to the mastery of The Last Alliance or Evernight, but proves that Battlelore is if anything, steadfast in their commitment to being the most ardent keepers of Tolkien’s text in the epic metal realm.