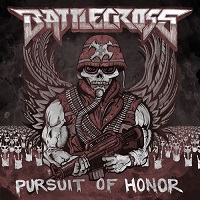 Hailing from Michigan, Battlecross are a unit ready for solid collision course across the touring globe thanks to its potent debut record, Pursuit of Honor. Blurring the lines of old-school thrash and new-school melodic deathcore, these 10 songs plus intro have that knack of producing instantaneous aural excitement, be it the Don Slater bass heroics during “Push Pull Destroy” careening comfortably against the double speed Tony Asta/Hiran Deraniyagala guitar harmonies, or the traditional riff gallop swimming parallel to the octopus-like Michael Kreger drum movements on “Deception”.

Rumbling over the top of this music juggernaut is vocalist Kyle Gunther, who will not be mistaken for anything less than a workhorse on the microphone. Employing a multitude of screams, roars and growls, it’s shocking there isn’t much blood emanating from his larynx on “Man of Stone.” All five musicians come together to perfect pit-worthy harmony on the low tuned future show action highlight “Breaking You,” the riffs and drum parts dive bombing in a back and forth jackhammer exercise guaranteed to inflict serious limb damage.

The guitar players throw down a number of tech metal tricks in “Rupture,” noting their love of At the Gates, Death and Testament for sure in this cyclone-like arrangement. You can tell being from the blue-collar state of Michigan Battlecross allow a variety of influences to meld adequately into their style, but there’s no mistaking the roots of thrash and exemplary lead play throughout this album. Bay Area thrash mongers will delight at “Better Off Dead,” a great exercise in Exodus-meets-Dark Angel ferocity.

Expect Battlecross to bring their relentless brand of metal to the masses for years to come. With Pursuit of Honor, they prove Americans can balance thrash, death and a touch of the modern screams without pandering to the lowest common denominator.